Sol LeWitt in premiere today -7th of May-  in the US!

Since beginning of this year Icarus Films does the distribution of Sol LeWitt for theUSandCanada.

Today is the USpremiere of this great documentary at the Film Forum, New York. Sol LeWitt will be screened until the 13th of May and director Chris Teerink is also attending the screenings of 8th and 9th of May (both at 8:25 pm).

The film already received great reviews, even the New York times has praised the documentary. Here is a sum of the reviews until now:

On 9 May  at 1 PM there will be an interview with Chris Teerink. He can be heard on “The Leonard Lopate Show” , on the New York Public Radio. You can listen here. 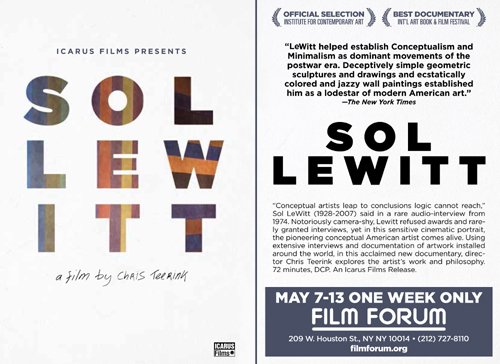